After the Presidents Club... the blueprint for balance 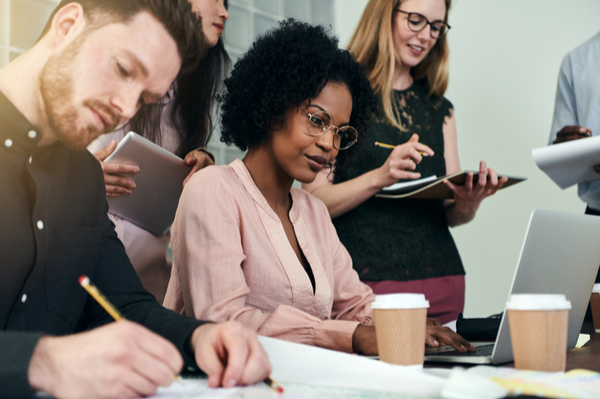 CMI has just launched its landmark Blueprint for Balance report with a powerful call to “Call it out, challenge it, change it”. Now you can read the story of the launch – and watch the video

The day after the closure of the Presidents Club, CMI showcased the rise of women in management at the launch of its report A Blueprint for Balance: Time to fix the Broken Windows in central London. All the talk in the room, a mostly female crowd, centred on that week’s lurid headline news – and what business can do to stop the discrimination that women still experience in the workplace.

“It’s been quite the week to be launching the report,” said Patrick Woodman, CMI’s head of research advocacy. “We couldn’t have planned it better.” Then he joked: “We had nothing to do with the sting.”

The report’s mantra is to “Call it Out! Challenge it! Change it!”, and was at the heart of the case-study presentations and panel discussion in a room intent on addressing gender inequality in the workplace.

Petra Wilton, CMI’s director of strategy, introduced the evening – chief executive Ann Francke was at ITN doing an interview about the report’s findings.

Topical though the issue is, Wilton reminded attendees that the report had been 18 months in the making and, while the findings are sometimes bleak, the report does provide many powerful, real-life examples to help inspire culture change. “It’s the culture that’s wrong. We are talking about changing the everyday behaviours,” said Wilton.

CMI’s Patrick Woodman spelled out the report’s call to arms: call it out; share stories; make it a business issue; make change personal; and work with men as agents of change. “Men are supporters and allies, not just blockers and barriers,” he reminded the audience. “2018 will be the year we fix the broken windows – the smaller, discriminatory and sometimes accidental behaviours that continue to exist in our culture and contribute to gender inequality.”

Watch our video on calling out workplace discrimination

The next speaker was one such male advocate: Air Vice Marshall “Bunny” James, the RAF’s head of training. His role, he explained, was to “talk back to all the middle-aged men”. His mission to improve the gender balance at the RAF was “not just a business need but a moral imperative”, and he reflected on how much the airforce has changed since he joined 30 years ago.

Clare Rowe, Deloitte’s culture and inclusion lead, said that “without changing the culture, change can only go so far”, and talked about her pride in the firm’s “Time Out” programme, where employees can apply for up to four weeks off every year unpaid to do whatever they want. She says it has helped make a difference to the culture of the firm. “Things are going in the right direction but we still have work to do.”

Carolanne Minashi, global head of diversity and inclusion at UBS, echoed Rowe’s point that real improvements in gender balance can only be made once the subject is taken seriously by senior leadership and becomes a strategic objective for an organisation. “It’s all about the impact and the net number change,” she said. She evangelised about UBS’s programme for career returners – and hoped the fledgling initiative could be emulated by other organisations looking to discover “a rich seam of untapped talent.”

Rachael Hanley-Browne, head of leadership consulting at headhunters Harvey Nash, said that employers must be seen to take action against bad behaviour. “Women need to see that the company really cares about this,” she said.

The Q&A session was chaired by CMI chief executive Ann Francke. Guests, unsurprisingly, were depressed by the research’s findings. “It’s completely depressing,” said UBS’s Minashi. “I hope that they wouldn’t be the statistics in my organisation.” Deloitte’s Rowe agreed: “I’m sorry to say that I wasn’t surprised”.

Dr Maureen Vontz, who headed up the Blueprint for Balance research, gave fascinating insight into the personal interviews she did with senior women for the report, particularly around the subject of “second generation gender discrimination”. This struck a chord with the audience.

Vontz said that, during the interview process, the women at first automatically gave the expected corporate response to questions; but then gradually the penny dropped about the unfair behaviour they had experienced.

The panel discussion focused mainly on sharing best practice, particularly on calling out bad behaviour. UBS’s Minashi talked about “bystander training” that the firm was looking into, while Deloitte’s Rowe spoke about Deloitte’s “respect and inclusion advisors”, who had been particularly effective at nipping issues in the bud.

Ann Francke wrapped up the event by reiterating the CMI’s “Call it out, challenge it, change it” plea and by asking “can we make 2018 the year that all of us roar?”

At CMI we have launched our Broken Windows campaign today to highlight these everyday acts of discrimination. To watch our Gender Inequality: How-to guide, please visit https://www.managers.org.uk/cmi-women/broken-windows

You can also join our Facebook Live Q&A at 8pm on 8 March with a panel of guest speakers, including the well-known blogger, Mother Pukka.

Read the executive summary of CMI’s Blueprint for Balance report.