How Does Google Get Things Done?

On a fall day in 1999, in the heart of Silicon Valley, I arrived at a two-storey, L-shaped structure off the 101 freeway. It was young Google’s headquarters, and I’d come with a gift.

Long before Gmail or Android or Chrome, Google brimmed with big ideas. The founders were quintessential visionaries, with extreme entrepreneurial energy. What they lacked was management experience. For Google to have real impact, or even to reach lift-off, they would have to learn to make tough choices and keep their team on track. Given their healthy appetite for risk, they’d need to pull the plug on losers – to fail fast.

Not least, they would need timely, relevant data. To track their progress. To measure what mattered.

And so: on that balmy day in Mountain View, I came with my present for Google, a sharp-edged tool for world-class execution. I’d first used it in the 1970s as an engineer at Intel, where Andy Grove, the greatest manager of his or any era, ran the best-run company I had ever seen.

The practice that moulded me at Intel still inspires me today – it is called OKRs. Short for ‘objectives and key results’. It is a collaborative goal-setting protocol for companies, teams, and individuals. Now, OKRs are not a silver bullet. They cannot substitute for sound judgement, strong leadership, or a creative workplace culture. But if those fundamentals are in place, OKRs can guide you to the mountaintop.

Larry [Page] and Sergey [Brin] – with Marissa Mayer, Susan Wojcicki, Salar Kamangar, and 30 or so others, pretty much the whole company at the time – gathered to hear me out. They stood around the ping-pong table (which doubled as their boardroom table), or sprawled on beanbag chairs, dormitory-style. My first PowerPoint slide defined OKRs: “A management methodology that helps to ensure that the company focuses efforts on the same important issues throughout the organisation.”

An objective , I explained, is simply WHAT is to be achieved, no more and no less. By definition, objectives are significant, concrete, action-oriented, and (ideally) inspirational. When properly designed and deployed, they’re a vaccine against fuzzy thinking and fuzzy execution.

Key results benchmark and monitor HOW we get to the objective. Effective KRs are specific and time-bound, aggressive yet realistic. Most of all, they are measurable and verifiable. (As prize pupil Marissa Mayer would say: “It’s not a key result unless it has a number.”) You either meet a key result’s requirement or you don’t; there is no grey area, no room for doubt. At the end of the designated period, typically a quarter, we declare the key result fulfilled or not. Where an objective can be long-lived, rolled over for a year or longer, key results evolve as the work progresses. Once they are all completed, the objective is necessarily achieved. (And if it isn’t, the OKR was poorly designed in the first place.)

I closed by recapping a value proposition that is no less compelling today. OKRs surface your primary goals. They channel efforts and coordination. They link diverse operations, lending purpose and unity to the entire organisation.

I stopped talking at the 90-minute mark, right on time. Now it was up to Google.

While Larry and Sergey had few preconceptions about running a business, they knew that writing goals down would make them real. They loved the notion of laying out what mattered most to them – on one or two succinct pages – and making it public to everyone at Google. They intuitively grasped how OKRs could keep an organisation on course through the gales of competition or the tumult of a hockey-stick growth curve. Along with Eric Schmidt, who two years later became Google’s CEO, Larry and Sergey would be tenacious, insistent, even confrontational in their use of OKRs. 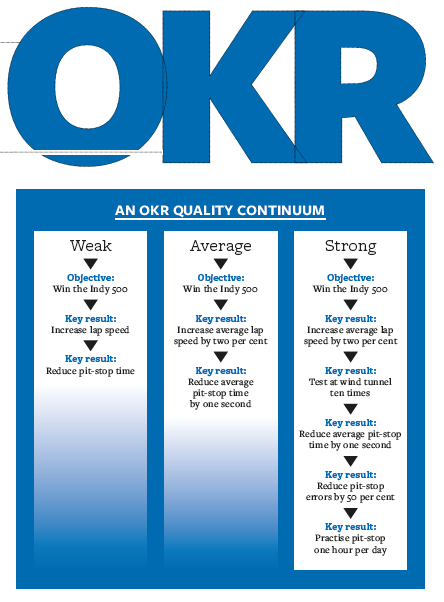 Focus And Commit To Priorities

Measuring what matters begins with the question: what is most important for the next three (or six, or 12) months? Successful organisations focus on the handful of initiatives that can make a real difference, deferring less urgent ones. Their leaders commit to those choices in word and deed.

The most powerful and energising OKRs often originate with frontline contributors. As a YouTube product manager, Rick Klau was responsible for the site’s home page, the third most visited in the world. The glitch: only a small fraction of users logged in to the site. They were missing out on important features, from saving videos to channel subscriptions. Much of YouTube’s value was effectively hidden to hundreds of millions of people around the world. Meanwhile, the company was forfeiting priceless data.

To solve the problem, Rick’s team devised a six-month OKR to improve the site’s login experience. They made their case to YouTube CEO Salar Kamangar, who consulted with Google CEO Larry Page. Larry opted to elevate the login objective to a Google company-wide OKR, but with a caveat. The deadline would be three months, not six.

When an OKR rises to the top line, “all eyes in the company are on your team”, Rick says. “We had no idea how we’d do it in three months, but we understood that owning a company-level OKR showed that our work took priority.” By adding so much emphasis to a product manager’s goal, Larry clarified things for other teams, too. Everyone rallied to help Rick’s group succeed. The YouTube cadre finished on time, though they shipped one week late.

Read more: the Google skills workshop that will boost the confidence of your team

At smaller startups, where people absolutely need to be pulling in the same direction, OKRs are a survival tool. At medium-size, rapidly scaling organisations, OKRs are a shared language for execution. They clarify expectations: what do we need to get done (and fast), and who’s working on it? They keep employees aligned, vertically and horizontally.

In larger enterprises, OKRs are neon-lit road signs. They demolish silos and cultivate connections among far-flung contributors. By enabling frontline autonomy, they give rise to fresh solutions. And they keep even the most successful organisations stretching for more.

Stretch goals were beautifully defined by the leader of the Google X team that developed Project Loon and self-driving cars. Says Astro Teller: “If you want your car to get 50 miles per gallon, fine. You can retool your car a little bit. But, if I tell you it has to run on a gallon of gas for 500 miles, you have to start over.”

In 2008, Sundar Pichai was Google’s vice-president of product development. When Sundar and his team took their Google Chrome browser to market, they were most definitely starting over. Driven to succeed but unafraid of failure, they used OKRs to catapult their product – and their company – to amazing. Chrome is now the most popular web browser by far on both the mobile and desktop platforms.

The career of Sundar Pichai is a stretch goal personified. In October 2015, at age 43, Sundar became Google’s third CEO. Today he presides over an organisation with more than 60,000 employees and $80bn in revenues.

Pichai: “Google stands for speed. The company has waged a constant battle against latency, the delay in a data transfer that degrades the user experience. In 2008, Larry and Sergey wrote a beautiful OKR that truly captured people’s attention: ‘We should make the web as fast as flipping through a magazine.’ It inspired the whole company to think harder about how we could make things better and faster.

“In 2009, we set another stretch OKR for Chrome – 50 million seven-day active users – and failed again, ending the year at 38 million. For 2010, undeterred, I proposed a target of 100 million users. Larry believed we should be pushing even harder. My target, he pointed out, touched only ten per cent of the world’s one billion internet users at the time. I countered that 100 million was in fact very aggressive.

“Larry and I eventually settled on an OKR of 111 million users, a classic stretch goal. To reach it, we knew we’d need to reinvent the business of Chrome and think about growth in new ways. Again, what could we do differently? In February, we broadened our distribution deals with the OEMs [original equipment manufacturers]. In March, we embarked on a ‘Chrome fast’ marketing campaign to heighten product awareness in the United States. In May, we expanded our demographic by launching Chrome for OS X and Linux. At last, our browser was no longer a Windows-only product.

“Well into the third quarter, the outcome remained in doubt. Then we did a small thing that became a big thing: a passive alert for former Chrome users who’d been dormant. Weeks later, at the end of Q3, our user total had surged from 87 million to 107 million. And shortly after that, we reached 111 million seven-day actives. We had achieved our goal.”

This is a lightly edited extract from Measure What Matters by John Doerr, published by Portfolio at £14.99. Copyright @ 2018 John Doerr. Doerr is the chair of venture capital firm Kleiner Perkins Caufield Byers, which has invested in some of the world’s top companies, including Amazon, Google, Twitter and UK ‘unicorn’ company Shazam. Learn more at whatmatters.com