How to use pictures, charts and graphics to make your message stick

I was invited to speak at TEDx Hull in February 2015. I chose to use drawing skills as a way of demonstrating that we all the limiting beliefs that hold us back from achieving our potential. Since most people think they can’t draw it is a good example of a limiting belief.

Therefore my aim was to teach the theatre audience some drawing skills to enable them to discover for themselves that they can draw. More than this however, my purpose was to encourage them as a result to challenge other potentially limiting beliefs about what may be possible for them.

Have a look at the TEDx video below to see what they learnt – sketch along with me. (To gain full benefit from the video it’s a good idea to actually sketch the pictures yourself. So just grab a pen and be ready to draw as you watch.)

Just like the TEDx talk, the book challenges the reader’s beliefs about what is possible.

Initially most readers will not believe they can draw, but then they learn that they can in fact draw pictures of a reasonable standard. In discovering this ability, the reader’s beliefs about drawing are directly challenged. However, by implication it follows that numerous other limiting beliefs are also challenged e.g. if people thought they couldn’t draw when in fact they can, what other false beliefs are preventing them from discovering new possibilities for themselves?

While it is not the purpose of the book to have the reader explore other potentially limiting beliefs, it is a powerful by-product of the act of learning to draw. Therefore, this example of a limiting belief may well be useful for managers trying to help individuals and teams discover their true potential.

WHEN YOU SKETCH IT, PEOPLE REMEMBER IT

Drawing a sketch is such a simple way to ensure that people keep your message in mind.

Raymond Nickerson’s study, reported in the Canadian Journal of Psychology, demonstrated the ability of people for picture recognition. Subjects were shown 10,000 vivid or striking pictures. When subsequently tested for recognition they were able to say with 99% accuracy whether or not they had seen a given picture before.

As you can see from the pictures below, all we need are very easy-to-draw pictures to make an idea memorable. Everyone can learn to get ideas across with simple sketches like this.

The examples below show that one picture can have many meanings. This is great news because it means that a given symbol can be used many times to convey numerous different concepts – there is no end to the number of concepts that can be brought to life with simple sketches.

IT’S EASY FOR PEOPLE TO SEE THE BIG PICTURE TOO

As you can see in the drawing on the right, it is easy to combine a variety of simple symbols to create the big picture. By adding a few labels it makes it even simpler to explain ideas in a way that people will find easy to follow.

Sketches such as this can be done almost anywhere without the need for special presentation equipment. All you need is a surface to draw on such as a flipchart, whiteboard or even just paper fixed to the wall. 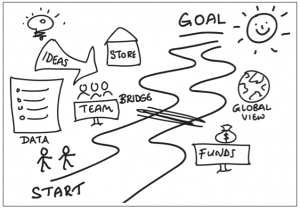 When an idea is explained verbally it is not always easy to see how all the elements relate to each other. By contrast, when people see the whole idea in one image such as above, the relationship between component parts are clearly seen.

For managers working with teams, pictures such as these are excellent for encouraging involvement. People will readily engage with the topic and spot problems or new possibilities.

There is a world of difference between presenting pre-prepared images and drawing a picture from scratch. When you start with a blank sheet, people have no idea what is going to be drawn. The moment you start drawing you have the attention of those watching.

Therefore this is a great way to ensure that people remain curious and follow your explanation.

It is not the quality of the drawing that makes it memorable, rather it is the fact that you are using pictures ‘live’ and adding elements as you go along.

When you draw ‘live’ not only will you get attention, but it helps people to absorb a lot of information. Building the picture up gradually makes it very easy for people to understand. You will be amazed how well people will listen when they are following a picture being created before their eyes.

JUST BE PREPARED TO HAVE A GO

Communicating ideas with sketches can be used in all kinds of business situations. Whether you are making a presentation, coaching a colleague or working with a team, sketching is a great way to make ideas clear and easy to remember.

So next time you have to explain an idea, just get visual - pick up a pen and sketch it! 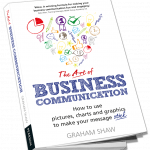 Graham Shaw’s The Art of Business Communication is shortlisted in the Practical Manager category of the 2016 CMI Management Book of the Year, in association with the British Library and sponsored by Henley Business School