Shape the future of leadership and management through our regional structure

The CMI North East,Yorkshire & Humberside (NEYH) Regional Board is currently inviting expressions of interest for new Board members to help support, shape and influence the important management and leadership work in our Regional Network.

As part of a wider review, we are now looking to strengthen our Regional Board. As such we are looking to appoint suitably qualified professional individuals with the motivation, drive, resilience and skills to assist the Board to continue to take the region forward from April, as we start to roll out more opportunities for our members to engage through local events and workshops.

If you are interested in developing your Board skills, and any of the exciting positions below match your professional skill set, we would kindly ask that you email an up-to-date CV along with a strong persuasive covering statement, setting out exactly the key skills, knowledge and experience that you would bring to the role. In addition, it would be helpful to understand why the role is of interest, so you are encouraged to set out your motivation for applying.

The following roles are available, and further information on each role can be found in the attached documents.

'Why Volunteer with CMI'

Please email your applications to: cmiregionalsupport@managers.org.uk by Friday 21 February 2020

Data: As part of our recruitment process, we will share information relevant to your application, including your name, current role, CV and other data you may have provided us with, with CMI Staff and CMI Regional/Devolved Nation Board Members who are involved in the recruitment process. We will use this data for the purpose of recruitment only.

Equal Opportunities: When recruiting for volunteers for our Regional/Devolved Nation Boards, CMI welcomes applications from all sections of the CMI membership community regardless of age, disability, gender, race, religion or sexual orientation.

It is widely accepted that those we surround ourselves with can significantly influence who we are.  According to research by Harvard’s Dr David McClelland, people you regularly associate with determine as much as 95% of your success or failure in life. This is a huge statistic!

We spend a substantial amount of time at work and the people you work with are likely to fall within the definition of those we spend the most time with. First it is important to point out that this can be beneficial. You have a perfect opportunity to meet people from a variety of backgrounds that can allow you to gain a new perspective on life. However, if you notice some influences at work are negative, how can you respond?

What steps can you take to increase positive influences? 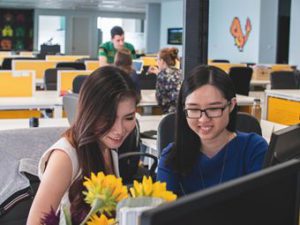 Your environmental peers that you work with directly, may already be positive influences.
If not, you can find intentional peers who will positively influence you at work by looking across your organisation.

LinkedIn to be a great tool for this, however connecting with colleagues through working groups, attending training and conferences can be effective too.

Inspiring teams to believe in the impossible

According to a study conducted at the University of Salford, Henry Ford might have been correct. Examining psychological resilience, the study indicates that people’s beliefs about their abilities determine their chances of completing a task successfully (or not). Psychologists refer to these beliefs about ability as self-efficacy. Self-efficacy emerged in the 1970s as a central construct in Albert Bandura’s Social Learning Theory; he defines it as “the belief in one’s capabilities to organise and execute the course of action required to manage prospective situations”.  This is particularly important when individuals face adversity.

As a leader, keeping your team inspired is an important responsibility, especially during turbulent or challenging times.  But I am not talking about just inspiring them to do their job well.  For our organisations to grow and truly transform we need to help our people to believe in something else.  To believe in something impossible.

In 1995 the average pitstop time in the Brazilian grand prix was around 42 seconds.  If the head of McLaren had said to the team he wanted to half that time they would have thought it was impossible yet in the 2019 Austrian grand Prix HAAS Ferrari completed one is 16.224 seconds.  The difference between first and second place in that race was 2.724 seconds.  The difference between winning or not was based on something that was once believed to be impossible.

You can watch a video of the difference between 1981 and 2019 here.  RedBull team completed a pitstop is 2.4 seconds

So how do we go about changing something from impossible to possible? What steps can we take as leaders to inspire our teams to believe in the impossible?

The people in your team are always going to be the subject matter experts. They are experts in their own adversity. The challenges and circumstances that affect their jobs and the blockers and obstacles they have to overcome on a daily basis. Give them the tools and autonomy to resolve their own problems and they will be far better equipped and motivated to help resolve the company’s challenges.  People want to feel valued and empowered.

The leaders of people-centric companies understand that it’s people who make their company successful. These companies realize that when people feel valued and cared for, they do their work with stronger intrinsic motivation, a deeper sense of meaning, and a greater level of engagement. By taking time to truly understand the perspective of our teams and helping them to resolve issues shows them you care about them.

They go the extra mile simply because they want to contribute to an organisation that cares about them.

We’ve all heard the phrase ‘a picture is worth a thousand words.’ By bringing a vision (literally) to life right across the organisation everyone in the business, at all levels, could see what was meant, could remember it, believe in it and, most importantly, knew what they needed to do to make it a reality.

Vineet Nayar radically transformed HCL Technologies by making all business decisions fully transparent.  He put financial data and key information on the company intranet so everyone could see the company’s problems and asked the employees how they could help.  “Employees do not trust management.  The reason is that they don’t understand the intention behind management decisions.”

Being really transparent about the road ahead opens up initiatives far beyond the scope of any management team remit.

Simon Sinek, British-American author, motivational speaker and organizational consultant talks openly about ‘Starting with Why’. His book by the same title is a bestseller.

“When most organizations or people think, act or communicate they do so from the outside in, from WHAT to WHY. And for good reason — they go from clearest thing to the fuzziest thing. We say WHAT we do, we sometimes say HOW we do it, but we rarely say WHY we do WHAT we do.”
“But when a company clearly communicates their WHY, what they believe, and we believe what they believe, then we will sometimes go to extraordinary lengths.”

There is a Chinese proverb – ‘The man who moved a mountain carried small stones.’ Nothing is impossible if it’s broken down into small enough steps.  A few years ago, I ran a half marathon.  When the crazy idea first came to mind I couldn’t run to the end of the street and therefore the thought of running a half marathon was impossible. Day two of my training saw me reach the next lamp post after the end of the street. Day three the second lamp post after and so on.

The real power of chunking is in the creation of small, achievable steps – keeping your team focusing confidently on what they know they can achieve, and preventing them from being intimidated by what the organisation wants to attain.  It takes an ambitious impossible goal and breaks it down into a series of achievable steps.

The questions you ask can either limit or expand the possibility of outcomes and responses you get.  Additionally, your choice of words will also dictate how involved, receptive and motivated the recipient will feel.

For example, in the heat of a month-end deadline, you might ask a project manager, "Why are you running behind on this project?" Your manager naturally feels defensive, put on the spot, and likely, unable to respond constructively – which reinforces the impossible.  An alternative question could be, "What can we do as a business to help ensure we meet the deadline?" Now, your project manager feels involved in the solution (vs. being accused of the problem), receptive to brainstorming alternatives and supported by you to ensure success. In short, he feels motivated to meet the goal.  The impossible might now become the possible.

The greatest challenge for all leaders is not how well you get your point of view across to others but how well you understand your teams perspective. Leaders who listen to their staff without trying to formulate a solution or response at the same time—leaders who just listen—can transform an organisation’s culture into one of trust, support, and collaboration. Employees must be allowed to have a voice in creating solutions to the stresses they experience through the demands placed on them by both leadership and the culture within the company.

Have you ever seen someone’s spirit get crushed? I have. I sadly watched recently in a supermarket when a young employee dropped some product on the floor and smashed it. His manager immediately reacted by loudly and harshly belittling him with his words, and by publicly humiliating him. He was visibly crushed. If he learned anything from that experience, it most likely was that accidents are unforgivable and should never happen. He learned that, in his world, it was not safe to make a mistake.

When people believe that it is not safe to make a mistake or to fail, they will stop putting themselves at risk. They will stop taking chances, putting in effort, and growing. Instead of taking a risk, or learning something new, or stepping up to the plate, they will revert to a place of self-preservation. They do this to protect themselves from the consequences that could come with failure, by removing the risk of failure altogether.  Again, this simply reinforces the notion of impossibility.

We need to remember that failure plays an important role in the development of our people. For that reason, leaders need to have the right perspective regarding failure, so that they can intentionally harness its power for good and help our teams to learn and grow.  Failure is certain. We are imperfect people, living in an imperfect world. As General George Custer once said, “It’s not how many times you get knocked down that count, it’s how many times you get back up.”

It is imperative we give people a chance to get back up after they have fallen, to “get back in the saddle” and try again. The goal is that they have learned from their failures and become more competent and skilled, which will be better for everyone.

By following some simple steps, we can help our people believe in something they thought was impossible.  When our children were young we held their hands until they could walk on their own. Leadership in its simplest forms is no different.

If adversity is generally defined as difficult, challenging or unpleasant events, situations or circumstances then believing in our people and giving them the tools to succeed helps them overcome it.  Overcoming adversity builds resilience. Building resilience helps them turn the impossible into the possible.