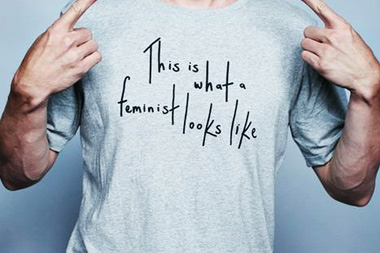 Campaign group the Fawcett Society says it will investigate claims that its feminist t-shirts, worn by a host of public figures including senior politicians, were made in a sweatshop that exploits its workers. According to a Mail on Sunday report from the weekend, the shirts emblazoned with “This is What a Feminist Looks Like” – paraded by the likes of deputy prime minister Nick Clegg, Labour leader Ed Miliband and his deputy Harriet Harman – were made by women in Mauritius paid just 62p an hour.

It is further alleged that workers at the factory – one of six facilities owned by Compagnie Mauricienne de Textile – workers sleep 16 to a room. Their typical pay of £120 per month is a quarter of the Mauritian average wage. Meanwhile, profits from the items were meant to be dedicated to the Society.

The t-shirts were produced for the group following an approach from stylists at Elle magazine, who offered to revamp an existing shirt with the same slogan in a different font. After a new version of the slogan was finalised, high street chain Whistles, led by known feminist and proponent of ethical manufacturing Jane Shepherdson, was asked to make the garments. In a statement, the Society’s deputy CEO Eva Neitzert explained: “We met with Whistles over the summer to discuss the t-shirt design and production and, upon querying, were assured that the garments would be produced ethically here in the UK. We also agreed that 100% of the profits would be donated directly to the Fawcett Society.”

Signalling her disappointment with the allegations, Neitzert said: “As a charity that campaigns on women’s rights in the labour market, we have been concerned right from the outset of our collaboration with Elle magazine that any products meet rigorous ethical standards … Upon receiving samples of the range at our offices in early October we noted that the t-shirts had in fact been produced in Mauritius, upon which we queried (over email) the ethical credentials of the Mauritian factory, and the fabric used.”

Whistles replied that CMT’s compound was a “fully audited, socially and ethically compliant” factory, adding: “It is a completely integrated textile mill and its ongoing success can largely be attributed to its innovative and integrated approach.”

Neitzert explained: “If any concrete and verifiable evidence of mistreatment of the garment producers emerges, we will require Whistles to withdraw the range with immediate effect and donate part of the profits to an ethical trading campaigning body. While we wish to apologise to all those concerned who may have experienced adverse conditions, we remain confident that we took every practicable and reasonable step to ensure that the range would be ethically produced and await a fuller understanding of the circumstances under which the garments were produced.”

If there is any truth to the allegations, the Society, Elle magazine and Whistles will all have questions to answer about the due diligence process with which the provenance of the shirts was checked. One of those questions may be: was it right for the Fawcett Society to accept assurances from just one source? Clearly, the issue of whether the T-shirt was being made in the correct environment was raised before the weekend’s press coverage, but did the parties involved do enough? Should it not have verified the facility independently and cross-referenced them with other knowledge from across the textiles industry?

As the fallout of this situation continues, observant managers from other charities and retail organisations will be keen to see that the means of production behind their merchandise does not conflict with their social messages.

For a masterclass in ethical conduct, sign up to this special CMI seminar based on its MoralDNA research, set to take place on 27 November.