Does running make you a better manager? The evidence 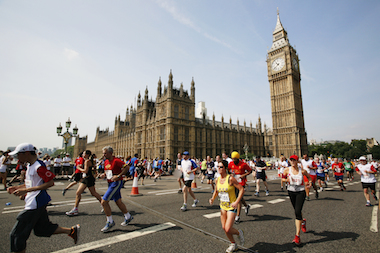 The London Marathon takes place this weekend. Across the UK, hundreds of thousands of people are taking up running – is this the answer to solving Britain’s low productivity dilemma? Could running help make our business leaders and companies more efficient?

The UK is a hub for global running: the 34-year-old Virgin Money London Marathon, which takes place this Sunday (April 26), is one of the biggest events in sport. Britain is also the home of Parkrun, the weekend running event that has now been taken up in more than 600 venues worldwide. Tens of thousands of British people run to and from work, or head off in groups for lunchtime jogs.

At the same time, Britain suffers from one of the poorest productivity rates of any developed economy, with output per hour at woeful levels. Could our growing passion for running help reverse a perennial economic problem? Might the dedication, commitment and planning required to be a successful long-distance runner help us run more successful businesses?

We looked at some of the evidence.

For some of the world’s great thinkers, such as Enigma codebreaker Alan Turing, Nobel Prize-winning scientist Wolfgang Ketterle or novelist Haruki Murakami, running has helped them think more clearly.

A single protein, called oestrogen-related receptor gamma, controls the flow of blood and nutrients throughout the body. People with increased amounts of the protein receive energy boosts to their muscles and brain, enabling them to perform better, according to the study’s author Ronald Evans, director of Salk Institute for Biological Studies in California. American researchers have discovered that running improves memory and learning.

It’s no wonder that more and more business leaders, working in a high-pressure environment where they need to make thorough, quick decisions, are starting to stretch their legs.

Happier managers and workers are more productive, as they take greater care and pride in undertaking their role, as well as expressing greater freedom. If you want to build morale and increase workplace happiness, you may want to encourage a company running club.

Researchers at the Karolinska Institute in Sweden discovered that aerobic exercise, such as jogging, removes from the blood a substance known as kynurenine, which accumulates during times of stress and is linked to depression. Dr Jorge Ruas, principal investigator at the Department of Physiology and Pharmacology, said: “Skeletal muscle appears to have a detoxification effect that, when activated, can protect the brain from mental illness.”

Often runners talk about feeling a wave of euphoria during their races and this may be explained by how the activity leads to the release serotonin in the body, which improves mood.

One quality that running legends such as Mo Farah and Paula Radcliffe share with the most successful business leaders is the willingness to win. At all costs. They know that business is a long journey and that the most determined who reach the finish line first. As the entrepreneur-blogger Ben Kaplan says, “Battle through pain. No one said it was going to be easy. Tough. it. out.”

Running brings to the fore a competitive edge that, says psychologist Dr Lisa Firestone, many leaders try to hide. “Competitive feelings don’t discriminate. They can be felt toward distant strangers or our closest friends. However, because these feelings often feel unacceptable to us, we tend to ward them off or disguise them in ways that can be hurtful to ourselves and to others. When we suppress these feelings, we leave them to fester and impact us in a variety of negative ways,” says Firestone.

“It’s important to get comfortable with our competitive feelings. We can do this by recognizing that thoughts and feelings are separate from actions. We can allow ourselves to feel whatever we feel, then choose how we behave.”

Image courtesy of Bikeworldtravel - from Shutterstock