Moya Doherty: Leaders need to put people and community at the heart of business 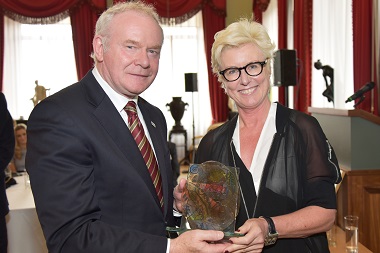 Moya Doherty, co-founder of Riverdance and chairman of RTE, recently received an award from CMI in recognition of her outstanding achievements as a leader in the creative industries. Doherty talks candidly about her leadership lessons, working in male-dominated industry, and the importance of placing people at the heart of business

I was, earlier this month, delighted to be the recipient at an event in Belfast, of the CMI’s All Ireland Business Consultant Award for outstanding leadership.   Winning the award has encouraged me to think more deeply than I may have done about the nature of leadership, both in a general sense and in relation to what has come to be known as the creative industries.

When I first became immersed in the commercial aspects of the entertainment business the notion of creative industries had not yet emerged.

I am delighted it did because it offers a much better definition of the complex networks which make up these industries while allowing for this work to be quantified and given its rightful place in the economic ecology.

We now know that the creative industries bring £10m a day into the UK economy, a figure which makes this work difficult, if not impossible, to ignore.

Similarly, during the early stages of my involvement through Riverdance in the creative economy, I didn’t think greatly about what leadership meant, what kind of leader I was, or what leadership in this industry should look like.  I just got on with it.

However, having given it deeper reflection over the last few years, prompted by the economic collapse of 2008,   it has become quite clear to me that the techniques and methodologies I tried to apply are now those most needed in the 21st century economic space.

People and community at the heart of business

To place this in context, this shift in leadership practice away from systems of hierarchy and individualism into leadership forms grounded in collaboration, project management, experimentation and flattened hierarchies has emerged because of the crisis of free market liberalism, not because of any enlightened understanding of creative practices.

As Paul Mason has shown in his most recent book, Post Capitalism, it was free market liberalism which led us to the crisis of 2008, and the present global crisis is the manifestation of the need to move away from this model into an economic system which eschews the need for constant growth in favour of a system which places people and community at the centre of the economy.

Looking at the principles of leadership I would group them under three main headings.

First, there is the issue of where the leadership takes place.

Hierarchical, ‘removed’ leadership is no longer possible in a business word where agility, data analytics, social networking, and personal engagement are paramount to the audience/market.

So I want to lead from the centre of the organisation, being as close to the day-to-day workings of the organisation as I can, recognising that a business will have many teams, all working on different, equally important projects.

Second, leadership must now be a shared experience with collaborative practice as the core value.

This is not to abrogate decision-making responsibilities, but to acknowledge that no one individual can possibly have the complicated range of offline and online skills necessary to make important decisions.

However, the leader must also make the difficult decisions when needed.

Third, I think it is the place of the leader to manifest the kinds of culture one wants a business to represent,   whether that be style, public demeanor, ways of communicating, social responsibility, or personal engagement.

Leading in a male-dominated economy

I am sometimes told that being a leader as a woman was easier in the creative space since it is a more liberal environment.

This is I think a dangerous misconception.

The worst excesses of discrimination, and even blatant misogyny, were as present in the entertainment industry as any other and have had to be resisted as in any other workplace.

I believe that this resistance has given women a greater range of workplace coping skills, but leadership for woman is still problematic.

Granted the worst excesses of misogyny may have publicly disappeared residing only in some kind of subterranean place from which they emerge occasionally (as in if one is running as a Republican or UKIP leadership candidate), but the real issues for women in leadership are still systemic.

The core business models are still grounded in patriarchal notions of leadership which even seep through into social practices (after-work socialising, the ‘golf club’ syndrome),  practices which operate against the plethora of roles, work and domestic, women are still expected to undertake.

So, I would say that whatever leadership skills I have,  and which have been so generously acknowledged by CMI, have emerged over time and have been tried and tested in the most demanding public arenas.

That they have also emerged as the way forward in what is possibly the most profound period of economic crisis since the 1930s gives me some hope for optimism that we will start to build a new global economic model, grounded in culture rather than finance and forsake whatever Luddite economic tendencies we may hold which ultimately will be as useful, to use the phrase of Douglas Rushkoff, as throwing rocks at the Google bus.